Energy drinks have become firmly established in society and are very popular, especially among young people. But they are not exactly very healthy, at least the well-known representatives.

Red Bull gives you wings. At least that's what the advertising claims. To be honest, I have no idea whether energy drinks really work for me. Nevertheless, I drank it regularly. More regularly than I should, at least that's what my girlfriend used to tell me.

It's also true, Red Bull contains a lot of junk and even more sugar. Not exactly the drink that you should drink regularly. Somehow, though, I do end up being an energy addict. And then I stumbled across HOLY Energy by accident. By chance means here: On Twitch at a streamer who is an advertising partner of HOLY.

Without further ado, I bought a trial package. In the package are different varieties in convenient sachets. This is practical for trying out, but also quite expensive at 1.43 euros per serving. A few days later, the package was there and we could try. The taste is delicious, but the grains in the drink are unusual. More about that later. I like grains, for example, also the seeds of raspberries, my girlfriend not so.

HOLY promises that no artificial flavors or colors are used. In addition, the energy drinks are sugar-free, so one comes with a drink of 500ml on not even 20 kcal. In comparison, a can of Red Bull has 112 kcal and 27.5 grams of sugar. The caffeine content of both is 320 mg per liter. That is the maximum amount allowed by law. However, HOLY splits the caffeine into normal, fast-acting, and encapsulated caffeine called NewCaff with a four-hour distribution. These are the granules. Less caffeine directly, but over time. HOLY Energy does not contain taurine for this. 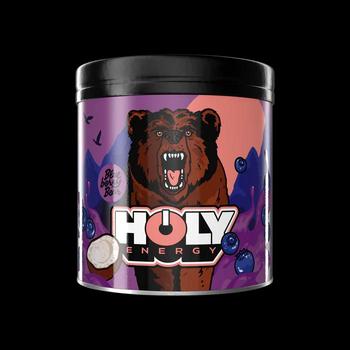 During my vacation there was a promotion from HOLY. Orders are depending on the invoice amount still free shaker, stickers and trial packs added. Now I was weak and have ordered three varieties including shaker. With the action it was then so two shakers, three varieties and several sample bags (to give away).

What can I say? Since then, I drink a HOLY Energy almost every day. Sounds like a lot, but it's better than Red Bull. Or coffee with sugar. When I look around at work, many drink three or more cups of coffee with sugar a day. That's more sugar and more caffeine than I have.

So a thumbs up from me for HOLY Energy. My girlfriend is now also quite fond of the drink. That surprised me personally. Where she always leaves a sip in the shaker, the grains.