After we arrived well in Vlieland we have explored the island by bike on the second day. The island is small, but we are also unsporty. As we have noticed.

The early bird gets the worm. Or in other words, we were up early. Of course, even on a relaxing vacation there are new things to experience. After the sumptuous breakfast buffet, we wanted to rent a bike. Walking is stupid in the long run and the hotel gave us a 10% discount.

Stupid, the bike rental is in town and the shuttle bus comes at 09:30 only if you request it in advance by phone - which of course we did not know and have not done. So on foot the three kilometers into the village.

For my small size, the rental had no suitable bike there, which is why I was offered a women's bike in a suitable size. To be honest, I am thrilled how easy it is to get on a bike. Since I become almost envious of the ladies. Otherwise, it was a simple bike. 7-speed hub gears and spoke lock.

After a short shopping in the supermarket we are directly to the lighthouse. My girlfriend loves lighthouses. And Vlieland has a lighthouse on the highest mountain of the island, after all 45 meters high, which you can climb a small path and stairs. From the lighthouse, which we could visit for free, you had a view over the whole island. 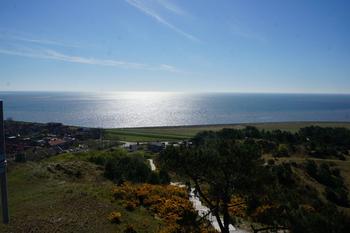 Back down, short break on a bench halfway, and off on the bikes. After all, there is a longer road, which you can follow. And we followed it. Long. At least for unathletic people.

After a while I noticed that there are numbers on the road. 5,0... 5,1... 5,2... Ah, they wrote the distance to the town on the road. We didn't really want to drive to the end, so I pointed out the numbers to my friend at 8.2. Okay, we were almost at the end of the island anyway, so on to 10.0. The island still goes on, but the road is closed from there on. The large sandbar to the south of the island is used by the Air Force for bombing exercises. We parked the bikes and went to a dune from which we had a nice view over the beach and the sandbank. 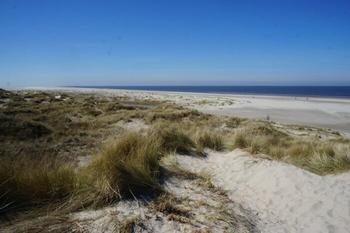 You can stay here for a while. We did. Probably almost 30 minutes we sat on the dune enjoying the silence and the view. After a little walk across the beach, we went back on the bikes. We had to go back 10 kilometers again and we still had booked ourselves in the wellness area.

On the way back, our lack of fitness became noticeable. The closer we got to the town, the heavier our legs became. That's why we didn't turn towards the hotel, but took a short shopping break in the town. A small and cute place that reminded me of the towns in the south of England. And despite being secluded, my friend was able to find new slippers (made of sheep's wool!) and gloves for a decent price.

But even the break didn't help anymore, the last kilometers to the hotel were energy-sapping. Almost exhausted we went to the wellness area. A covered (will probably open in summer) and heated swimming pool, which turned the room rather into a steam bath. Sure, you did not have to freeze, but it was not pleasant.

Therefore, after a short time we went to the sauna area. Three saunas and a steam bath were offered. The latter was not in operation because of Corona. In addition, a whirlpool. Who goes to public whirlpools, please? These are an ideal breeding ground for all kinds of pathogens. In addition, a medium-sized family, which did not know the usual wellness rules such as silence. But we were exhausted enough and I fell asleep discreetly on the lounger after a sauna session.

Waking up again, the family was gone. Either they were disturbed by my loud snoring, or gone before. I hope the latter. After a second sauna session, we packed up too. A quick shower later, the question was: where do we eat dinner? By bike into town? We both clearly lacked the motivation and went back to the beach restaurant. The menu had enough choices for two evenings. And again offered a view of the sunset.

This was the end of our trip, by and large. After a not very restful night - my girlfriend had sore muscles from hell - and another extensive breakfast, we checked out. With the bikes we quickly went to the marina and then back to town. Bicycles hand in and wait for our speedboat.

The return trip went then, little surprisingly with a speedboat, much faster. Thus, we still had the opportunity to look at Harlingen. A pretty port city, which could not pull me but in the spell. Possibly, because simply the time was missing.

The car had to be picked up from the parking lot. After a little more than five hours we arrived, this time without breakdown, drawbridge, but with traffic jam, back home. After all, I had planned another four days of vacation.

But that's another story...